The average number of police-reported sexual assaults spiked in Canada after the emergence of the #MeToo movement last fall — but that hasn’t led to an increase in criminal charges.

After sexual assault allegations against movie executive Harvey Weinstein first surfaced in October 2017 and kicked off a global anti-sexual assault campaign, the average number of police-reported sexual assault cases went from 59 per day to 74 per day, according to a new Statistics Canada report published Thursday.

That accounts for a 25 per cent increase in the three months after the hashtag #MeToo first went viral — October to December 2017.

Statistics Canada defines police-reported sexual assaults as cases that are reported to police and then classified as founded criminal offences — those where a police investigation determined a crime took place.

The agency said the jump doesn’t necessarily reflect a rise in the prevalence of sexual assaults in Canada, but likely is attributable to an increase in the number of victims willing report to police.

However, the increase in founded cases has also meant more cases going unsolved.

Just under half of founded cases were classified as not cleared before #MeToo. That figure increased to 56 per cent after #MeToo launched.

When a case is founded but not cleared, it can mean that there was evidence that a crime took place but no perpetrator was identified, said Statistics Canada in its report.

Shift away from ‘unfounded’

“Cases that would have been previously classified as unfounded are now being founded, but consequently, proportionally more are going unsolved,” notes the report.

‘Unfounded’ is a designation applied to a complaint when police determine through investigation that an offence did not occur.

A 2017 Globe and Mail series found that police in Canada determine sexual assault cases to be baseless at a rate far higher than for other types of crime, raising questions about the conduct of investigations and the distortion of statistics related to sexual assaults.

Since then, police forces across the country, including the RCMP, have vowed to review sexual assault cases deemed unfounded.

“Changes in police practices explain some of these shifts, given that when more sexual assaults are founded, a lower proportion may be solved as a result,” said Statistics Canada.

“Overall, victims of sexual assault were disproportionately young women and girls. Over half of sexual assault victims in 2016 and 2017 were females under 25 years of age, a proportion which was similar before and after #MeToo,” notes the report. 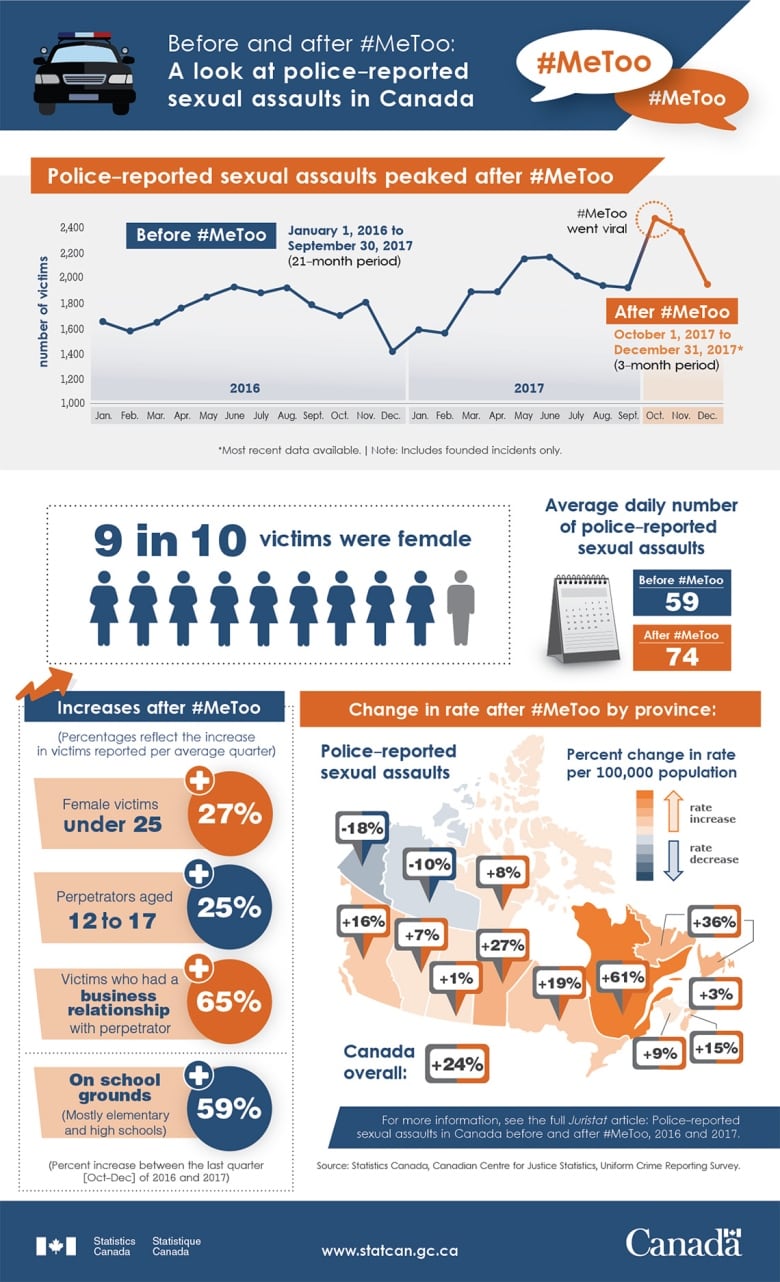